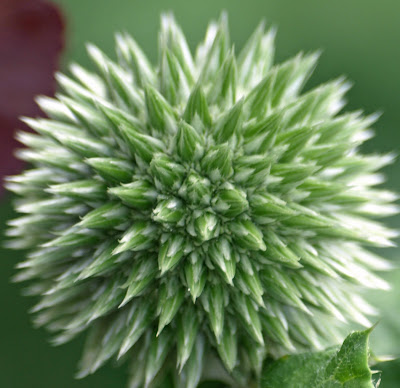 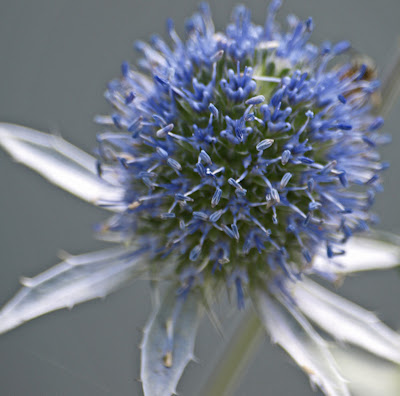 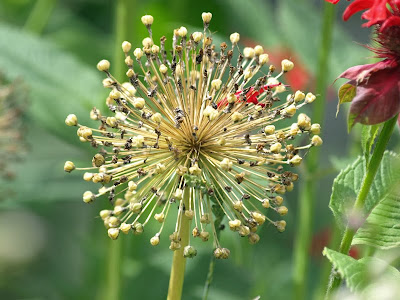 Even though it's a grey day today I was out doing some gardening. We seem to be having a lot of rain the last few weeks and it's been difficult to get out there and get some much needed weeding done. As I sit here looking out the window, the sun is trying to peek out and another shower has begun...oh my!
After I did a little weeding in the herb garden I grabbed my camera and set out to capture some seasonal flowers. I was inspired by Sheila's blog the other day as she has an amazing close up of a daisy. Go check out the heart she accidentally captured along with it.
So I was drawn to do some close ups. I also seemed to be drawn to globe shapes today since that seems to be the pictures I chose to share with you. The first one is a Globe Thistle which is just about to bloom. It has beautiful blue flowers in a week or two. I'll try to capture them for you later.
The next photo is a Sea Holly thistle. The bees love this one. The photo is a little deceiving though. It's really only about a half an inch in size but there is lot's of them.
And the last picture is of my Giant Allium's seed pods. If you want to see them in bloom check out this earlier post. I'm not sure which I like best, the flower or the pod.
Posted by Wendy at 12:55 PM

Great pics, Wendy, love how "close up" they are!

I love to teach and offer workshops in paper crafting, painting, scrapbooking, metal embossing and jewelry making. I have a studio in my home and I travel teach. Check out my available workshops and e-mail me for more information. Get 5 or more friends together and create your own choice of workshop to do at my studio or your own home.

For the lastest news, subscribe to Dragonfly Dreamers newsletter.